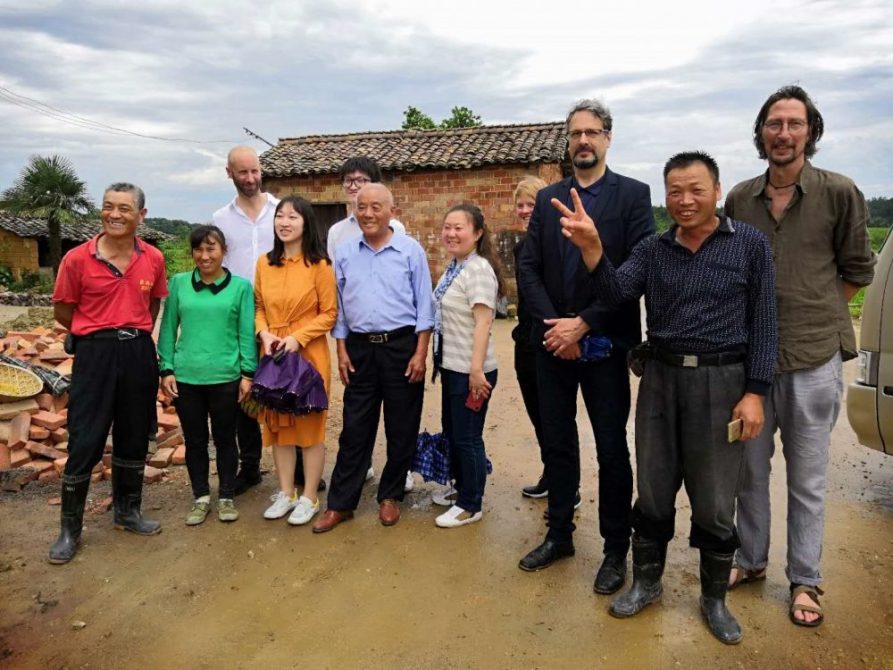 On 11th June 2019, with the release of its Reply to the Proposal of Dafang Village Construction Project, the Development and Reform Commission of Jinxi County (Fuzhou, Jiangxi) announced the start of phase one of the reconstruction of Dafang Village a.k.a. “Holland Creative Village.”

“We hope the construction starts tomorrow.” Mr He Jiang Bei (Herbert-Jan Hiep), CEO of the Holland Cultural Heritage and Market Research Institute (IVEM), is enthusiastic about the project. Mr Hiep is a Dutch expert on the re-use of cultural heritage and a member of ICOMOS. He has rich experience in coordinating projects that aim at creatively redeveloping traditional cultural sites.

Where the Netherlands and Jinxi meet and mingle

Holland Creative Village is located close to Xiugu Town, Jinxi County. As introduced by Mrs Gao Lianzhu, the Deputy Party Secretary and Mayor of Jinxi County, the Holland Creative Village is a collaborative project jointly developed by Jinxi County, China Culture Media Group (CCMG – closely linked to the Chinese Ministry of Culture and Tourism) and IVEM. With the purpose of proactively utilizing traditional Chinese agrarian culture resources, this ancient village redevelopment project will draw on Dutch experience in the preservation and adaptive reuse of cultural heritage, as well as the Dutch design, art and creativity.

Jinxi is home to 102 ancient villages (the number is the highest in Jiangxi). With more than 900-year history, Dafang is one such ancient village and keeps many well-preserved ancient buildings dating from Ming and Qing Dynasties. As Mr Hiep explained, the decision to chose Dafang from the many ancient villages as the site of the project was made after a comprehensive examination of a range of different factors, including location, size, protection level, space for construction, etc.

From 26th to 29th May, the joint team of CCMG and IVEM visited Jinxi to conduct field study for the project. During the meeting with Jinxi government, the Dutch artists were given the opportunity to present their design concepts. Mr Hiep affirmed that the joint expert team will try every effort to integrate Dutch cultural elements into Dafang village, building up a cultural exchange platform between China and the Netherlands. As he said, “We hope we can contribute to the project with our understanding and experience in cultural heritage preservation, working together with Chinese architects, designers and artists to create a new future for these old buildings.”

Indeed, Mr Hiep and the joint project team already came to Jinxi several times before, for field study: From 10th to 12th July 2018, Mr Hiep and Mrs Xu Lian, the deputy editor-in-chief of China Culture Daily, conducted the initial field study in Jinxi for the Holland Creative Village Project; then, Mr Hiep and a team of Dutch (landscape) architects and a curator came back to Jinxi in September, explaining the general framework, the planning of the architecture, the landscape and water system and the programming for the “Dutch Creative Village.”

“We will strive to transform Dafang into a place where the old and the new can integrate with each other” as Mr Hiep stated, “We want the Dafang Holland Creative Village Project to become a place where western and Chinese cultures can meet and mingle and create something new.”

Make the project unique and promote it by word of mouth

Actually, the story of Mr Hiep and China didn’t start long ago. He visited China for the first time in 2014 and fell in love with the rich Chinese culture. The vast amount of cultural heritage in China has aroused great interest from him. Gradually, he has become the communicator between Dutch and Chinese culture. The Dutch Creative Village Project will be a clear demonstration of the cultural exchange between China and the Netherlands. “We hope Chinese and Dutch, designer, artists and other creatives can work together and be inspired by this intercultural communication in this ancient village that still preserves typical old Chinese cultural tradition,” Mr Hiep said.

On 23rd September 2018, while accompanying Mr Hiep and other experts during their visit to Jinxi’s ancient villages, Mr Xiao Yi, Vice Chairman of Jiangxi’s Provincial People’s Political Consultative Conference and Party Secretary of Fuzhou Municipality, stated that he hopes the experts can fully employ advanced international concepts to develop Dafang village into a demonstration project where eastern and western ideas truly integrate. He further said that he hopes the project, together with the Sanweng Garden in Wenquan, become prime examples of international cultural exchange.

How to attract international tourists from countries like the Netherlands and increase cultural exchange between China and the other countries? Mr Hiep has his own answer, “it will not be easy but the principal way is to make the project unique so it gets promoted by word of mouth.”

According to Mr Hiep, when the average foreign tourists come to China, they all want to see the Great Wall, Xian, and the Forbidden City, however, there is also a specific group of tourists who want to experience ‘new things’. Thus, it is important to start from these tourists first and when they begin to spread their own experience by word of mouth, more and more international tourists will be attracted to Dafang Village. By doing so, the Dutch Creative Village Project will be able to promote intercultural exchange through tourism.

In 2018, during his meeting with Mr Hiep and other Dutch experts, Mr Zhang Hongxing (Deputy Party Secretary and Mayor of Fuzhou (4 Mio inhabitants) stated that Dafang Village has an intact and clear-cut layout of a Chinese ancient village, as well as many ancient buildings. And he hoped that the Dutch Creative Village can be developed into a prime example for rural revitalization and green development.

“The main answer is people. You have to bring together people.” Mr Hiep stated that the key factor for rural revitalization is people, and it is important to create an atmosphere that attracts these creative, entrepreneurial people and allows these to live and work happily together in these rural areas.

Mr Hiep spoke highly of the ongoing development of Characteristic Towns in China, and also gave his suggestions on how to avoid too much homogenization during the process. “Be creative! Dare to ‘not copy’, dare to invent and try out your own ideas and answers.” As he stated, the new generation of consumers have their own unique demands and he will bring more creative inputs to the redevelopment projects. He hoped that Dafang Creative Village can become a creative district with unique features.

In recent years, China has witnessed a rapid development of cultural and creative parks. There are many achievements, but some issues also occurred. Mr Hiep agreed that “it is very important that these cultural and creative parks can get creative power together.” At the same time, he also introduced some Dutch experience: to regenerate empty areas with ancient buildings in Holland one would often to construct basic facilities, the spaces in this kind of parks will then be rented to creative people at a relatively low price; painters, artists and theatres will gradually gather there; and then the parks will slowly start to live. It will attract new people and very often kick-starts further development…

As Mr Hiep suggested, the Dafang project will build up its brand around creativity. “We will bring in creative people and unlimited creativity. We hope, in Dafang, in Jinxi, that we can inspire the new millennial generation, as we are working in a different way than what is usually done in China .”

“We will make Dafang into an interesting place for Chinese and Dutch creatives, for the people who live here and for tourists that seek inspiration and new experiences” This is Mr Hiep’s vision for Dafang Dutch Creative Village’s future.

The video of the interview will be released soon.